Farm of the Week: Sowing the Seeds of Diversification 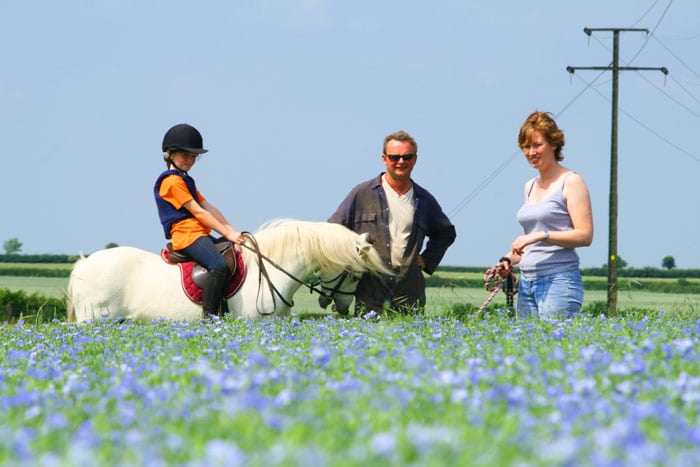 What is the next old crop in line for a revival? Chris Benfield, Yorkshire Post reports on a contender which is being tried out in West Yorkshire.

EVERYONE has a memory of linseed oil being part of the household armoury, it seems … for mixing oil paints, oiling cricket bats, curing ailments and moistening putty, for a start.

Grace Liddle grew up around horses and remembers the seeds being boiled up to make a jelly for them. And she has heard it is still fed to show cattle to give them a shine.

But the stuff trickled out of most of our lives because there were cheaper and easier substitutes. And what was left was usually the product of a factory process, using heat or chemicals to maximise the extraction.

However, now that diet is science rather than lore, the cold-pressed version of the oil is making a comeback. Or so Grace and her husband, Nigel, believe. They have placed a substantial bet on it. And a quick Google search turns up the reason – an almost-perfect balance of Omega 3 and Omega 6 fatty acids, according to those who know one Omega from another. 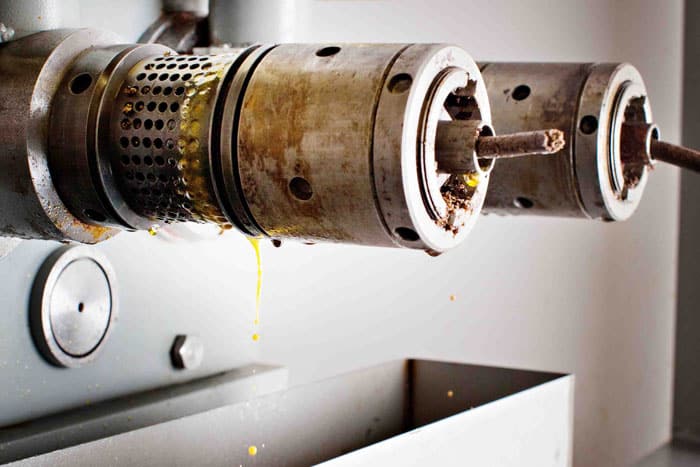 The couple farm alongside Mrs Liddle’s father, James Nichols, who has a 325-acre tenancy at Compton Grove Farm, near Collingham, south of Wetherby. He runs a traditional arable operation on most of it and the Liddles fit into the rotation by taking 40 acres for “bed and breakfast” for outdoor pigs. A bigger operator supplies sows, feed and medicines.

They supply land, labour and bedding, and give back seven kilo Duroc-cross weaners at a fixed price – reared to Freedom Food standards. Since they married, in 1996, they have built up to 750 sows. Their most recent contractors, M&J Easey, have been fair, they say, and there is still a premium for the RSPCA guarantee.

But the pigs business has been squeezed so hard everybody feels it. Also – and the couple are not the first to mention this – the Government-created demand for “renewables” from Drax has added a local levy to the price of straw.

Mr Liddle is 41 and his wife is 39. They will stick with the pigs business but it would be hard to expand it and for some time now, they have been looking for other sources of income.

They rent out some stabling and since their girls, 11 and 13, started school, Mrs Liddle has run an equine laundry, “busier every year”, picking up at the Country Store, Collingham; Peckfield Farm Shop, Garforth; Marston Animal Supplies, York; and Discount Feeds, Wetherby.

It chimed with what she knew when a friend with a history in the Irish horse business mentioned a revival of interest in flax – the other name for linseed, and the one the Liddles have chosen to work with, to make a distinction between their products and paint thinner.

You can buy cold-pressed flax oil from them now, via www.pureflax.co.uk, or retailers listed there – including the laundry agents listed above. And they have a national distributor ready to go – Trilanco at 01253 888188.

In the course of getting this far, they have had to learn a lot and spend a lot and profit is still some way off. But it does look as if they jumped in the right direction at the right time.

A scare over GM “contamination” interrupted the flow of Canadian flax into Europe a couple of years ago and there is still a shortage.

It was in 2009 that the Liddles bought a tonne of flax seed; got it processed by a rapeseed presser in Northumberland; paid for lab analyses for nutritional content; bottled and labelled it; showed at the British Equine Trades Association show in Birmingham and distributed free samples, using a BETA mailing list.

By the following spring, they had enough favourable reaction to go ahead with their first planting.

It was another gamble. They were depending on a grant from Yorkshire Forward, under the Growing Routes scheme for farm diversification, for 40 per cent of the cost of refurbishing an outbuilding and installing the German press they had chosen. They needed to drill the crop in April. But thanks to the General Election, they had to wait until May to hear they were getting the money. 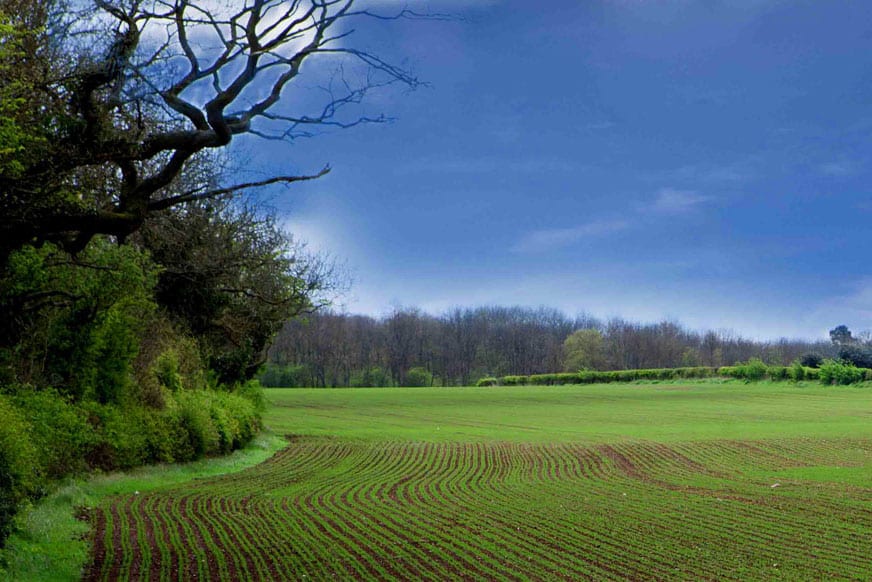 The crop took well and the press was ready for the August. But before harvest, the crop had to be stopped, so it dried out and formed seed pods – a process known as dessication. Mr Liddle applied the recommended product at the recommended time but he was a touch too late, especially as it was about to rain for three weeks. Combining was “a nightmare”, thanks to tough green stalks hanging on to their seed heads.

“There were only about three hours in the afternoon when combining was even possible,” Mr Liddle recalls. “We tried three contractors in the course of the harvest and they all had the same problems.”

Eventually, however, he got about a tonne of seed per acre, which is around the average expectation. If all had ended as well as it started, he thinks he would have got something like the 1.3 tonnes, at the upper end of the yield range.

Next lesson was to adjust the press to get the most out of the seed without raising the temperature too high. It is a delicate trick which Mr Liddle has been learning ever since. But since last November, he has been averaging 250 litres of oil from each stored tonne. 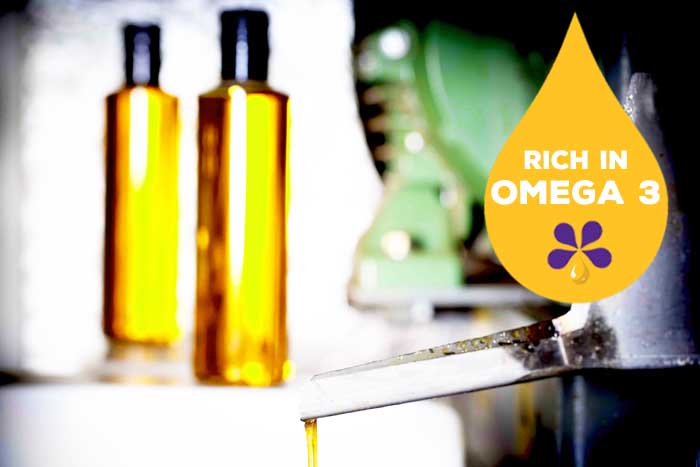 The Liddles did not get that much and what they have had is not all profit, of course. For one thing, the pig farm staffing has gone up from one and a bit to two, to give Mr Liddle time for the flax.

“But long-term,” he sums up, “We have something which should out-perform corn in quite a big way.”

Last year’s crop will be finished by the time this year’s is ready. The 25 acres of it planted this spring are at least three weeks behind schedule, because of the dry start, and it is anyone’s guess how far they will recover. But the Liddles are already sure they will do it all again next year anyway.

Linseed for horses used to be boiled, they have discovered, because the husks sometimes carried a poisonous mould. Modern filters get around that problem and West Yorkshire Trading Standards – “who have been brilliant” – have certified the oil for horses, dogs and cats, and indicated it could be sold for human consumption for the cost of a minor upgrade.

At least one customer has told them he drinks it anyway and they are talking to a couple of health food manufacturers about the possibility of selling capsules. 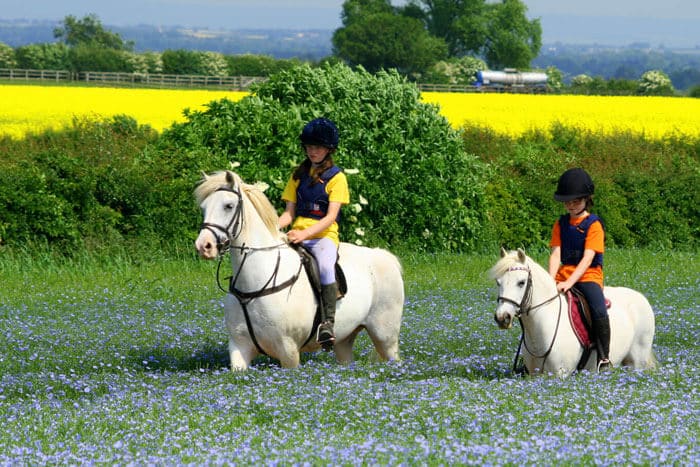 Meanwhile, their daughters’ ponies, including a 20-year-old, seem to be thriving on it. And their two black labradors will lick up any that gets spilled.

Website tributes are fulsome. And a painter in Devon says he has finally found the linseed oil he was looking for to get the finish the Old Masters got.The Liddles have no idea why it fell to them to yield an oil which painters could buy hundreds of years ago. But maybe you know.